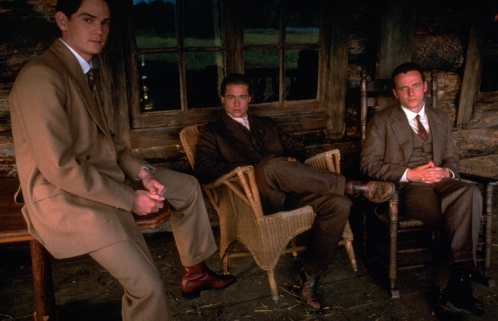 I saw a movie today.

It was one of the saddest movies I have ever seen.

Jeni began crying about five minutes after it started and she did not stop until the end.  But I did not cry until it was over.

Legends of the Fall was absolutely amazing.  It’s very hard to describe.  I don’t know where to begin, but in the movie Samuel Ludlow was killed in a battle during World War I.  It was a horrible death.  He was tangled up in barbed wire, blind, and blown to pieces by a machine gun, all before his brother’s eyes.  This happens pretty early in the movie and the main story is about how the surviving brother deals with all the trauma.

But after the movie was over, I was watching the credits and I saw a name:  Henry Thomas.

Jeni looked at me.

“I don’t remember seeing a little boy in this movie.”

Then I remembered a grin given by Samuel Ludlow.

Holy Cow.  E.T.’s little friend had grown up.  I instantly realized that it had been over 12 years since E.T. came out and that two soldiers had shot up innocent little Elliot!  I imagined E.T. seeing this horrific death and my eyes began to water.

Jeni was laughing at me, but I was balling like a baby.  The theater was empty.  The credits were rolling.  The lights had come on, and I was on the front row, crying my eyes out.

I couldn’t stop thinking about it and I cried the entire way home.

Jeni seemed a little embarrassed of me.

Every day I grow older.

And although I have my life planned out, I now see how it can easily change.

Everything around me is covered with snow.  It is winter here and it can be seen.

But it is not winter in my heart.  It is springtime.  I am still young.  I am growing.

So little I have seen.

So much I never will.

Yet I continue to tell my small story.

I continue to tell my legend.

This young friend of E.T. is also growing older.

There are still some things to do and accomplish.

There is still a world he must save.